You can read the full ruling from Google here, but finally a triumph of sense over solicitors.

For most, the above page is a dull footnote in the ocean of Google blog posts, but for those using Adwords, this is exactly what we were expecting (and hoping) for.

What Was the Problem

A few years ago, brand owners threatened Google by arguing that they were using their trademarks unlawfully by allowing businesses to use their brands in keywords and adverts.

Brand owners thereby forced Google to let them approve which advertisers could, or could not, use their brand.

If this had been done properly, all well and good, but in our experience what this meant was that brand owners decided that those who offered the best discounts, or special terms, or even import of branded good were effectively barred.

Whilst those who towed the corporate line were given ‘special dispensation’. 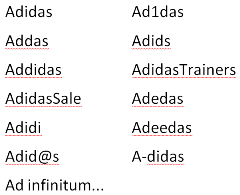 The upshot of this was, however, ‘ugly’ adverts. For example on ‘Adidas’ trainers then the advertisers would misspell Adidas – Addas, Ad1das, and so on. So, for example, the advert could look like this:

From only £29.99 buy Ad1das trainers
With free delivery.

It was soon realised that whilst Adidas could take out further brand protection with Google, they would have to cater for all misspells and then they’d still be dealing with ads which are well written but don’t mention the brand at all.

… Which Brings us to Today…

So, finally the post from Google which has just been announced for the UK: essentially any legitimate store or advertiser of branded goods can use the trademark on Google.

Sense has prevailed at last. But if you think that Google just did it for us, then think again. More brand advertisers is undoubtedly a good thing for advertising revenues. They may be backing ‘the little guys’, but you can be sure that they’re confident it will be worth their while.

After all, it is by increasing the number of advertisers that the big G’s pockets are filled!

As usual, Yahoo! and MSN are some way behind Google. Just had an email in from one of the two telling me that they were stopping me advertising on a brand name… ah well… give it 6 months to a year and they’ll catch up at the back!