Why the London Olympics Tickets Website Gets a Fail

There has been a lot written about the London Olympic games and the ticketing. To a certain extent it would have been very difficult to get everything right, but having been through the initial round and then the ‘repechage’, it’s time to take a critical look at the online user experience.

We have come up with four reasons why they frustrated with their online ticketing and therefore reduced their chance of success.

The sponsorship issue is something which is inevitable with such large sporting events. However this time round this has caused two main problems. Firstly because such a large proportion of tickets are given to sponsors, the visitor had no idea how many were available when they were bidding on ticket options.

Worse, because of their exclusive tie up with Visa, they have limited the ordering options – no other credit cards can be used or ordering by other means (bank transfer, cheque or otherwise).

2. Be More Transparent In the Selection Process

Yes, we all knew that our applications were subject to a ballot and, particularly where an event was over-subscribed,  our chances were not very high in getting hold of tickets. However that doesn’t mean that it should have been such a secretive process.

One of our colleagues applied for nine events with 20+ ticket choices and, whilst some were athletics, others were canoeing and BMX. He didn’t get any tickets and is still, six months later, none the wiser about whether having all those options reduced or improved his chances of tickets.

Would it have been difficult to have given some advice on how to apply for tickets? Given a ballot takes place, surely some of the numbers could have been reported back in terms of chances of tickets and results.

As it is, some of the tickets he failed to ‘win’ were back on the market for the second round of purchases. How does that work?

Result: A lack of transparency leads to lack of trust and invites criticism.

So, you would have thought that they would have learnt for the second round of bidding…

3. Report Accurately What Tickets Are Available

Being a losing bidder the first time round gave the ‘opportunity’ for the second round of bidding. The only opportunity it really presented was one of hours of frustration. Every shopping website we advise knows how important it is to report on availability as early on in the shopping process. 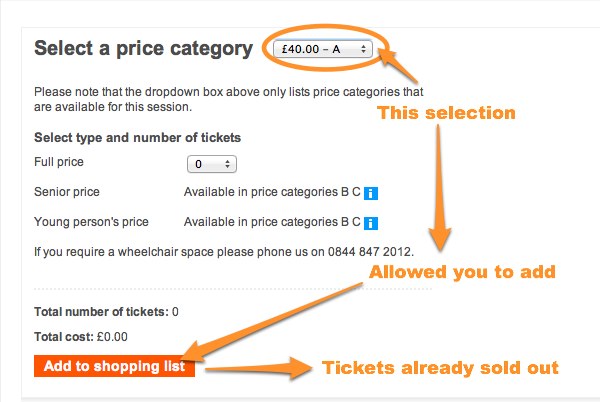 There’s nothing worse in putting items into a basket only to realise that they are sold out or not available. Yet, that is exactly what the Olympics ticket site did, showing many more tickets available than there actually were – even though by now it was purely a first-come first-served basis.

So, anyone looking for tickets had to add them to their shopping basket, click to try to buy them, mainly fail, empty their basket and start the process again. Every. Single. Time.

We expect that they would have sold many more of the outstanding tickets much more quickly with less server load if they’d just got this right in the first place.

4. Have a Persistent Shopping Basket

It’s more difficult to spot the mistake when you can’t see it, but when you’re offering what is a shopping experience, then why is there no shopping basket on the search pages?

This caused endless problems in the first round, particularly at the times when the site ground to a halt: did I add those tickets to my basket? Are they in there? What is the total value of my basket right now?

However these paled into comparison to the second round because you could only have one set of tickets in your basket to order. Yet (see above) you didn’t know what tickets were available as the drop-downs did not reflect the tickets which were actually available.

So you ended up in a eight step loop for every single ticket attempt – search, find, choose pricing and tickets, add to basket, try to purchase, mainly fail, find shopping basket, remove tickets from shopping basket and then, finally, back to search.

And then when you finally did find suitable tickets, if you wanted to compare them with any others you had to remove them from your basket in order to search for others to see if they were available, write them down to remember them, and then hope if you returned, they were available again.

Yes, this is 2012. Yes, this is the biggest sporting event on the planet. Yes, we are (allegedly) a country that’s ripe with ‘digital’ skills and experience. So, yes, for us the tickets website gets a #FAIL.

What LOCOG do is entirely up to them and, given we are unlikely to have another event of this scale in the UK, perhaps this will help the next hosts of the Games in Rio de Janeiro more than the current management who are busy getting ready to schmooze the corporate sponsors and athletes.

However, here are some tips to take away when it comes to website and user experience: